Hey! I'm Azure! And Hunter, and Bede, and Macaque. Sorry for being a namehoarder. And sorry for getting 3/4 of those names from fictional characters. You can call me whichever of those floats your boat. Welcome to the page where I talk about myself for an obnoxious amount of time! 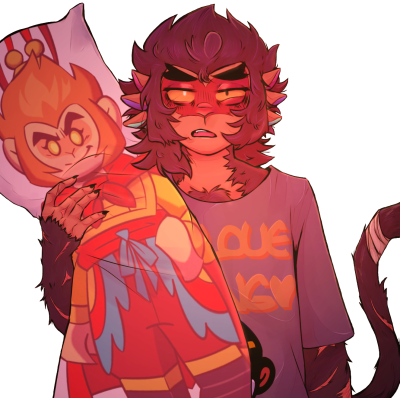 I use he / moon / bun / fae / she pronouns, and I'm just your local boygirl who can like anyone of any gender enough to kiss them. And no matter what gender the person in question is, it would be gay. (Which is to say, I'm a male/female bigender bisexual.) Some more label stuff (because I actually quite like my many labels) include that I'm autistic, I have BPD and I'm a femme!

I'm a rather silly little guy, I'd say, and I'm filled to the brim with love and passion for my interests! As previously stated, I like psychology, art, animation, queer history, misc animals (like bunnies, hyenas, cats and otters), and the culture around things like 2D love, otherkinism, gender fuckery, and fandom. Currently, my main media interests are LEGO Monkie Kid, The Owl House and Pokemon, but I have many, many more. I'm also really interested in and passionate about bisexual and autistic activism. Rest assured, I could ramble about all of these topics until you hated me. Also as previously stated, I think that capitalism fucking sucks and is the root of most modern problems, and I want to set it aflame and watch it burn to the ground. I regularly fantasize about killing Elon Musk, stealing all his money and then distributing it to charities and the GoFundMe's of people in need. I have been cancelled on Twitter four times. Once for jokingly calling myself a 'mean bisexual' (because 'mean (sexuality)' is lesbian-exclusive, according to Twitter), and another time for using the double-venus symbol (⚢) in my display name, because that's also apparently only for lesbians now. Then a third time for accidentally listing a canonically gay character as a bisexual in a thread where I admitted up-front that I didn't watch most of the serieses I was about to list, so to take the list with a grain of salt. The last time was for correcting someone who said that a character was 'always intended' to be queer (saying that it was actually a retroactive decision, so it would be inaccurate to say that they were 'always intended to be' queer), so people got mad at me and digged through my posts until a thread about me was made. Said thread consisted of me literally just not responding appropriately to online social situations (because, you know, autism), and the original poster saying "this was weirdo behavior" and the like. So there's that. Also, Hero Hei (one of the most popular 'look at the triggered SJWs'-type YouTubers, who focuses on anime specifically) once made a video on me, which I wear as a badge of honor. I'm an artist, too, by the way! Even though I won't post my art here (because of bandwidth), you can check out my stuff right here and right here.

I am alterhuman (a fallen angel / demon specifically), as well as fictionkin. One of my core fictotypes is probably made obvious by this website's themeing.

As you can probably tell, I am fucking cringe, but I am free! Being cringy is so much more fun than living a life where I'm afraid of being myself. If this doesn't say enough about myself, I asked my friends what fictional characters best exemplify my personality! So, here is a list of government-assigned characters, to give you a feel for what I'm like. (The first two characters are two I added myself, because I personally intensely relate to them. The rest are friend-assigned! Click an image to go to that character's wiki!)