times i should have realized i was trans 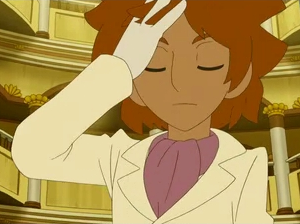 Okay, there's no easy way to say this, but I was so incredibly and intensely attracted to the character Randall Ascot from this game that it brought my attention back to my attraction to men, and, thus, back to the fact that my attraction to men felt gay. (You'll notice that this was even talked about in the Discord messages above.) This led to me actively researching if there was any way that I could be both MLM and WLW at the same time... And that's how I found out about the bigender identity.

So, yeah. I was so in love with a video game character that it transed my gender. Honestly, I could not think of a more in-character reason for my egg to crack. There was a little more to it than that, though. I saw the bigender identity, and I felt like it would make me really euphoric to be it, but I hesitated. I got caught up in the question, "What am I, ACTUALLY? Am I REALLY this thing, or do I just WANT to be it?" An incredibly daunting question that I had no idea how to answer. I got caught up in that for a long time; trying to figure out what I was 'really', when I usually can't even tell what I want for dinner. In the end, it was two things that led me to finally accepting my bigender identity. Both tumblr posts, actually. One by user unknought, which reads, "Reminder that if you're questioning your gender, 'what do I want?' and 'what will make me happy?' tend to be much more useful questions than 'what am I, really?'", and one by another user, actually not on the topic of gender, but instead reading, "Wanting to be a lesbian… Is a symptom of being a lesbian." Seeing these posts in succession one lazy day inspired me to try the label on. After all, I WANTED to be bigender. I WANTED to be both a boy and a girl. Not just going from one to the other, like the genderfluid identity, but at the same time. And, as I kept trying the label on, more and more, I found that the posts were right. If you 'want' to be a certain thing, that is the ultimate sign that you are that thing, but you are denying yourself the ability to feel as if you are. Whether that be because of self-doubt (like mine was) or something else. Verdant celebrated when I came out to him; no more having to put up with me being an oblivious egg! But, pup is also WLW and MLM, and pup admitted to being happy that we could be both of them together. Sun then subsequently got extremely confused when I said (again, copy-pasting here), "What if we kissed at Garfield Eats (and we are both WLW and MLM!!!!)", having to demand what the fuck Garfield Eats was in all caps. Gender identities may come and go, but me saying stupid shit is forever.
@Repth