the problem with flag redesign culture

So, pride flags. They're a thing. 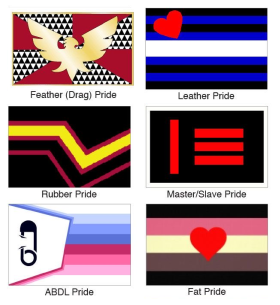 Ever since the queers of old, we've been designing pride flags for basically everything under the sun. It's, like, basically queer culture, and it's something that the queers of today have taken up as well. Whether it's for something niche and specific, or for a big, well-known identity within mainstream culture, pride flags are a symbol of queer community and pride that just about everyone recognizes.

But what happens when someone who created a flag... Did a bad thing? Well, in 2018, the lesbian community, unfortunately, became the first to have to come up with an answer for that, when it became more readily-available knowledge that the creator of the then-popularized red and pink lesbian flag had said some really vile shit. You name it? She's got it!

That's the story that you all are familiar with, right? The creator of the original lesbian flag was absolutely horrific, so we switched to a new one... But that's not all the reasons. What tends to be forgotten is that there were other issues that lead to its redesign. For one, the flag wasn't even designed with the intent to represent all lesbians. It was a flag intended to represent the lipstick lesbian subculture; just with the kiss mark taken off. It was also really hard to recreate and make merch of, due to the super-similar shades of red and pink...

And it turns out that the design was more or less stolen, too, from a cougar pride flag designed two years earlier!

So, because of all of these factors, the lesbian community banded together, and came out with the orange-to-white-to-pink sunset lesbian flag design that we all know and love! A happy ending to this story, right? Except, well... Not really. Because it seems like people looked at this successful overhaul of a community's flag, due to the creator being problematic, and decided that every single flag that had a creator who didn't 100% agree on them with every single topic simply HAD to be redesigned. (Even when they're not even the identity of the flag they're redesigning.) Gone are the memories of all of the other reasons why the lesbian flag was redesigned! Gone are the memories of the amount and intensity of the vile shit that the original lesbian flag creator said! The slightest off-color thing said by any flag creator can set off demands for a flag redesign, no matter how well-known the flag in question already is. The only flag except for the lesbian flag that has deserved its redesign because of the creator being shit has been the bigender flag (whose creator was a literal pedophile, abuser, AND transphobe, which isn't great when the flag in question is a trans flag). Meanwhile, shit like the aroace flag? The pansexual flag? Getting whole new 'redesigns', just because the creators of them are more inclusive than most people like. (Also, unrelated to the overall point I'm trying to make, but I have to say it: the redesigns of these flags are fucking dogshit. None of these people seem to know how to make a coherent flag design. 'Graphic design is my passion'-type shit, I'm telling you! They're just slapping colors together that they got off of a color palette generator, and assigning them meanings that nobody but them will associate with the color. One of the popular pansexual flag redesigns wasn't even made by a fucking pansexual.

The Twitter-agreed-upon 'new' pansexual flag literally just looks like the old flag with a piss-yellow filter, too, which is infinitely infuriating.)

It's something that the online queer community has to go through every couple of months now. People have completely forgotten that these flags are supposed to be for the community it represents, and doesn't just reflect the creator. And they don't realize that what they're doing is splitting the community of each flag in two. Because what a lot of these 'flag redesigns' boil down to is disagreeing on discourse. So you'll have half of the community using the old flag because they agree with the creator, and the other half using the new one... Flags are meant to unify the whole of a community! And in this age of 'flag redesigns' over the slightest fucking thing, that's been just... Lost. So, now it's all full circle, and people have decided that the sunset lesbian flag creator is problematic. For... Saying the d-slur. (Yeah, I don't know either.)

And the redesigns have come rolling in, and, like the pansexual flag just having a yellow filter over it, the most popular one is just the old design, but pastel.

And the creator of it has been literally blocking people who have pointed out that his flag design is shit because it isn't accessible to disabled people, and every person who has pointed out that it's the old flag but pastel has been attacked and called 'colorblind'.

As if the splitting up and dividing of the queer community isn't the real stuff that makes the community a worse place to be in; not a few flag creators who don't even usually profit off of their designs having an unpopular discourse take.
@Repth